One kilo of baking soda later ...

Hullo!
I don't know whether you know this already, but baking soda does work.  Just ... it's got a certain smell of its own.  I can't quite describe the whiff of baking soda ... it's not exactly pleasant on its own.  But it's by far, a better alternative than the present pong the Dexter and Wally been emanating.
I had them sit through a couple sessions of baking soda.  First a light dusting.  Then, I had a paste made which I marinade them in and let them stew for a bit - (the Furboys were not the least bit amused).  Last step was to hose them over.  By then, they were really upset. Three marathon showers in three days!  Too much!
Determine to defeat the stink, I cornered the shivering pups with tea tree spray. And fumigate with glee! I like the smell.  I know for a fact,  my four legged charges may beg to differ on that ...
Satisfied with my work, it was my turn for a shower - minus the baking soda!  :)
Posted by Tee at 10:39 PM 16 comments: 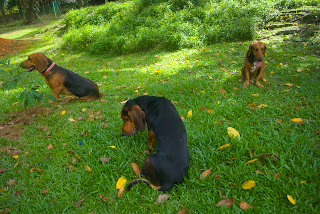 Dexter -crossly giving me the 'bum'. Wally looking (into camera) somewhat sheepish.
... that's the present challenge for this Dog Woods human slave.  The wander pups - Wally and Dexter were up to no good again. Just to keep you up to date, having these pups 'snipped' have only merely dampened their spirit of adventure.  They don't quite make an escape so much these days but when they do, they'll be gone for hours ...

Only God knows what they got up to yesterday ... but they came home reeking to high heaven.  It's a pong beyond description.  We don't have skunks in our neck of the woods ... but these Fur-boys, OMG!  It's the sort of stink that makes you want to instantly gag.


I had to hold my breathe while scrubbing these Fur-boys down.  Used all manner of soaps, disinfectant ... mind you, i had them scrubbed down at least thrice but to no avail!  Maybe I should resort to tomato juice ... at the rate they seem to still stink ...
Posted by Tee at 8:36 PM 19 comments: 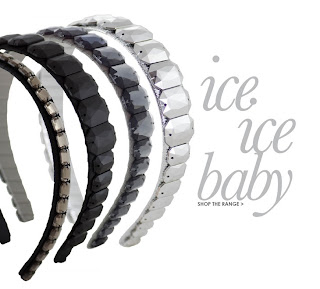 Tubby Jr. at large.  Me likes to howl in pwotests.  Gwannie Chief-y have been ups to no goods.  She's sez it's Howl-woo-ween awound the corner and sez we need a costume.  It fell on yours doggedly to be HER!  :P  (Talk about cweativity!).  Chief-y being a vewy hair-bandy toting hooman decided that she'd have me in a fur-band of her devise.
Flattered by all the attention and fussing, I indulged her few photo attempts ... see ...It came out looking like this!!   *HOWL!* 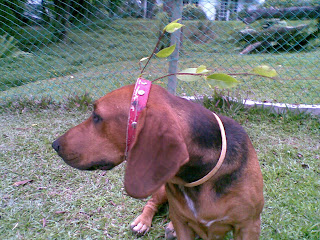 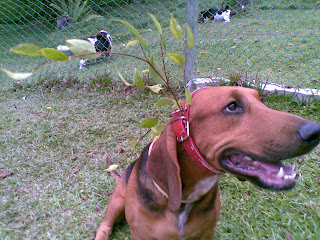 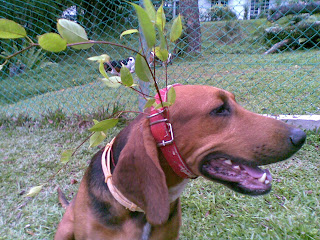 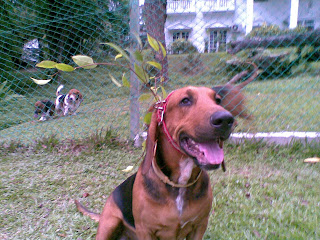 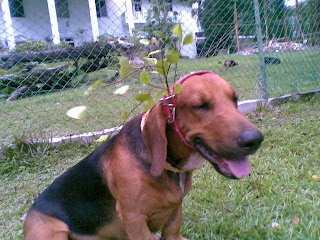 Honestly, the indignities we canines have to put up with!
Ol' Chief-y howevew thinks I'm being silly ... says her band-y cweation could make the scenes and walks of Ascot and Melbourne Cup (if only we canines were allowed in), all I'm missing is equally statement making frock to go with the headgear . Sometimes ol' Chief-y there forgets i'm a boy not a girl!
*Grrr-woof!* I think I have a tree gwoing out of my head ...
Posted by Tee at 11:38 PM 13 comments:

How much are the doggies in the window ...?

Pictures of Tuffy, Snoopy and Brandy checking out renovation progress.  Caught them 'posing' by the windows ... ;)  Pictures are abit grainy - having taken them using a camera phone instead. 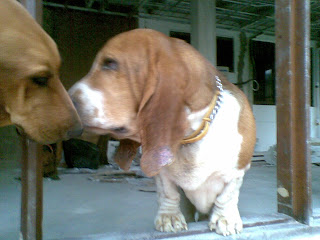 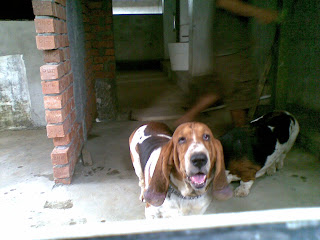 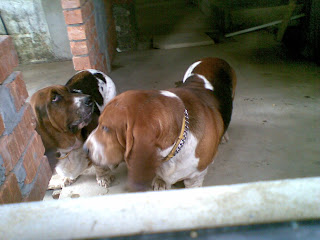 A critical eye: Snoopy seems to have certain reservations about how progress is coming along ... the basset has very high standards! 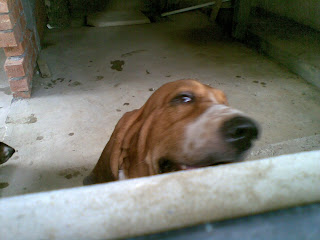 Getting up close and personal ... 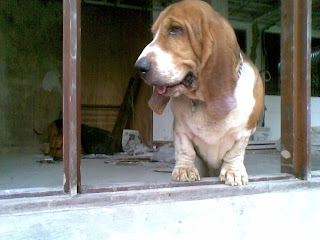 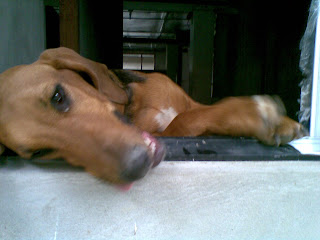 Found this little bird perched on one of the branches of a sapling last week.  It was night and the tiny fella had fluffed itself into a ball fast asleep.  Initially I thought it was work of on of the pups - could have toss one of it's toys or junk onto the upper branches my plants but upon closer inspection I realised i was looking at a little grey fluffy bird smaller than my balled up fist. Grabbed my camera - but was a little worried I might startle bird with flash photography.  Tried also to look nonchalant about taking photos of sleeping fluff-ball ... knowing the dogs, my interest in 'Fluffy' would definitely pique their curiousity ... From the size and height of sapling, they simply could just shake the poor bird out of it's perch!
To my relieve I found Fluffy back on the very same branch the following night ... three nights in a row in fact.  And on the fourth when she wasn't there ... I feared the worst.  The dogs had sniffed her out! And birds don't usually fare well at night.  But I think Fluffy (not sure whether it's a he or she), changes her sleeping branch now and again.  Am glad to see her alive and well at the same spot I first spotted her last week.  Not sure what species of bird she is, but she's sure fluffily cute! 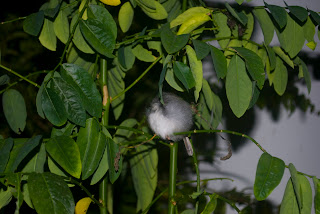 ...that's what I thought ... this morning as I watched that curious bright pulsating white light (think very bright flash photography or disco lights) flashing from a singular source into the darks of 3.20 am morning.

Accompanying those blindingly bright flashes was a low dull pounding buzz - which made me think of the hum of electricity coursing through life wires.  The white bright lights pulsated to a certain rhythm and when it 'stopped' - you could see a faint blinking yellow light (the sort you'd see on aeroplanes).  And this went on for at least 10 minutes ... alternating between pulsating blinding flashes that later lapsed into the faint flickering yellow.

Initially, I thought it was the florescent light (which hadn't been switched on) outside the window that had gone cranky. Oddly, those pulsating flashes were much too bright and too 'noisy' for florescent energy savers. Bleary eyed, I drew my almost 'blackout curtains' (yes it was that bright!) only to find the blinding flashes came from a certain distance.  Beyond the tree boundaries of Dog Woods.  It looked like it came from the neighbour's tree top or from the rooftop of another neighbour!  That was probably a good 200-300 metres away.

'There must be a logical reason for that light ...' I thought, once those bright flashes cleared the sleepiness from my head.  'A robber attempting to cut through a neighbour's roof?' (The recent encounters with light as blinding as that was from the end of a steel welder's soldering equipment).  But, the white light that emanates from a welding instrument is usually very narrow and focused.  The strange blinding white lights I was witnessing encompassed a wide and great distance.

'A faulty electrical cable ?' - hence the dull buzzing pounding hum which drove the pack into a barking frenzy every time they heard the noise. 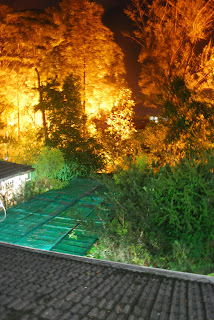 'Have the neighbour's flood lights gone awry...?' But their floodlights are usually warm yellow placed at the foot of the trees. The lights are only ever used over the Eid Festival. (see pictures I took over the recent Eid). Usually, it's just pitched black at night. (If you look at the picture, imagine it pitched dark, and white blinding flashes coming from somewhere in between of those trees)

'Someone with some major flash lighting equipment taking photos in the wee hours of the morning...? Perched on tree tops or on top of a roof...?'

And how does that explain the dull hum of a noise that accompanies each blinding white flash...?

I watched in bewildered alarm.  Wondering if a fire would break out, should I call the police? Should I wake the others ...?  But as inexplicably as it appeared, the light soon grew 'weary' and fainter and faded into the darkness of the early morning.

... I went back to sleep soon after - wondering what that was all about ... and since the rest of the human Dog  Woods slept soundly throughout, only the dogs are witness to what I had seen. The pack after all were the first on alert - stirring me from sleep.  It was those blindingly bright white flashes that got me out of bed to investigate.  Am still not sure what to make out of the lights in the wee hours of the morning.  One of Dog Woods human suggested I might have seen a UFO ...

Thing is, I don't believe in UFOs ... how then does one explain those strange lights?
Posted by Tee at 4:59 PM 11 comments:

... the newly snipped boys have run out of 'Romancing Juices', the rambuctious three have decided to dash into the unoccupied woods opposite.  *Heaves DEEeeeePPP SiGH* 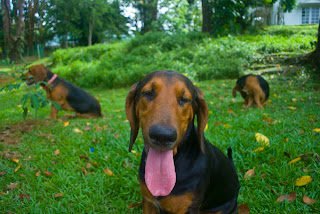 They've been good as gold since the unsnipped Tubby Jr.'s last outing.  Am beginning to think perhaps I should just accept that the Furboys need their dash outdoors.  They have been fairly capable in returning home after every self-planned outing ... Perhaps this is all a phase ... they will eventually calm down and  be contented with the fairly large grounds (more than an acre) that they get free access to 24/7.
Honestly la!! (la-being a very Malaysian suffix). I've noted that half my canine pack - esp. the more mischevious of the lot would go through a ' I gots to get out there an explore' phase in their poochie development.  Some would come home the instant you call them, some turn selectively deaf even you constantly call after them, but would turn to mush upon the sight of you (usually stewing) growling unprintable religious sounding words; Some decide its a game the more you go after them, the further they run! It's all maddening to varying degrees.
Maybe if I learnt not to get so worked up and accept that they need a little 'change of scenery now and again', these little episodes - admittedly, they're turning into mini adventures rather than the raging sagas they used to be,  wouldn't be quite as stressful.  Like I said, they know their way home.  It's just that I worry something might happen to them along the way ...
I suppose, they've proven to be fairly capable at handling different circumstances on their own ... and they are fairly independent, affectionate dogs that don't bite.  Just ... there are many non-dog lovers in the neighbourhood that don't understand canine behaviour and deem a curious sniff as hostile.  Can't helps it.  This human canine slave is a worry wart!
Posted by Tee at 5:26 PM 12 comments:

Tuffy and the Dog Woods Pack

We be the Dog Woods Pack with yours dog-gedly, Lord Tuffy as Dog Woods TOP DOG.
We once were NINE but with Trixie the Belgian Malinois's sudden passing, we now make a pack of EIGHT - With FOUR young Dobie-Hound Furkids, offspring of Basset Houndly yours and Anna the Doberman (a serendipitious 'accident'), Snoopy the basset and Joe the Rottie.
These blog entries record the various tales and antics of the Dog Woods Pack - told from both human and canine points of view.